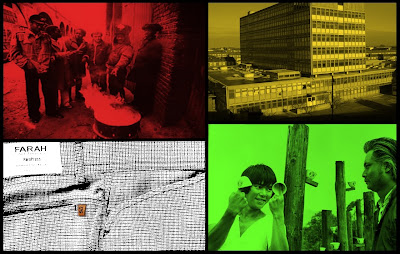 Upton house youth club, football in the sports hall
and FILM NIGHT where as impressionable teenagers we
were shown the warriors, countryman, snake in monkeys
shadow, the big boss and BABYLON!
Farrar slacks, Adidas sambas, crisps and dub.
celuoid visions of worlds we were still not party to.
From the viewpoint of now, i cant remember any
supervision at all, no teachers on late night duty
patrolling the corridors of this 60's concrete and
asbestos nightmare we called our secondary school.
Like some lord of the flies inner city youth experiment.
The hallways filled with mysterious older boys and men far
too old to be part of our school.
People, up to male shenanigans for sure, excitement to
be part of this evening meeting place not actually taking
part in any activities just hanging out.
This is a fantasy selection to evoke the flavour of the dance,
Sir Biggs, Saxon, Tubbys, the speaker boxes and the hall
in total darkness only the lights from the booth and the
occasional flare as a lighter ingnites spliffs and the
mysterious coded language of the dj as he guides us through
the evening.
this selection is for the children, the boys who i grew up
with, shared in these moments, ran with and played with.
eddie, hugh, peter, andrew, lloyd, randolph, trevor et al.
Posted by el jeffe at 20:45